For the past three weeks, I’ve been continuing the journal experiment, and yesterday, I took some time to get feedback from the class on their experience. I gave them ten questions to discuss in 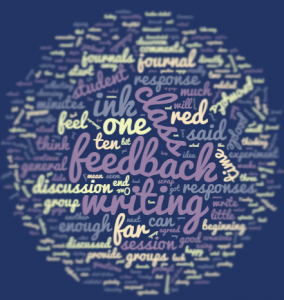 small groups, then asked the groups to share their responses. I figured that small groups would mean more responses, rather than relying on the more extroverted students, and would open the door to more critical feedback, as no one student had to claim responsibility for a perceived negative comment. I made no notes in class, as I’m trying to avoid using their words directly in my account of the project, but these are my reflections on the general discussion:

Not a lot of response; people seemed positive, and no one reported that their group complained or discussed doing away with the activity. Lest the lack of response be taken as indicating a lack of participation, let me say that it seemed to me that most groups did genuinely engage in the discussion. I only had ten minutes to give them for the discussion, so it’s certainly possible that they didn’t have enough time to articulate more affective responses, and focussed on more concrete questions.

One group said that the general prompts are good because they can write about anything and even vent a little. They seem to be using the journals as an outlet. On the other hand, another group said they really liked the prompt to think about a passage in the book or to relate themselves to a specific character. My take-away from this is that providing a few prompts is a good idea, since they then can choose specific or general, so I’ll continue to provide three or four writing ideas each session. I will, however, be more conscious of choosing prompts that provide both opportunities.

Consensus was that there was a good amount of feedback – definitely not too much. I’m relieved that no one said it was far too little feedback! I’m happy to write my responses, and sometimes I find myself writing quite a bit in one or two of the journals. That said, I’m looking ahead to semesters when I have more than one class, and/or larger classes, and thinking that writing in each journal for ten or more minutes will prove a monumental undertaking.

I was really happy with this response, because the students seem to validate the outcome I anticipated. They have so far only received one non-journal related set of feedback, but they told me that because we’d established a sort of conversation through the journals, they looked at that feedback as more of a dialogue. Hurrah!

Interesting response here – one student felt that the red ink perpetuated the teacher-student hierarchy, and kept things more formal. Another student said that the red ink was the best choice because visually, it stands out from black or blue ink, or grey pencil.

We discussed the perception of red ink – I revealed that I was choosing consciously to use red, because I want to bust some feedback myths, starting with the red ink is scary and mean. Changing ink colours doesn’t do much if the comments are the same. So if we can agree that the ink colour is just about the visual, then we can start to focus on the actual content of the comments. I’ll continue with the red ink, and keep this question on my next check-in with the class.

I loved this discussion, because it demonstrated yet another crossover between yoga and classroom. One student said the group discussed how writing at the beginning of the class got them into the head space of the class – it has become a ritual, like the meditative breathing at the start of a yoga session. This discussion bled into the next one, and we agreed that we’d scrap the end-of-class writing, but be more conscious of the start-of-class session as a lead-in to our classroom activities.

I’ve been doing ten minutes at the top and ten minutes at the end; as noted, we agreed to scrap the end of class session, because people tend to rush through it. Instead, we will experiment with a 15-minute session at the start of class. I am a little concerned about latecomers, but my optimistic side is thinking that late arrivals may diminish, because people are more aware of the writing ritual. We’ll see (says my inner skeptic).

After the first two weeks, I stopped collecting journals on Tuesdays, because it was impractical to provide thoughtful responses with a 48-hour turnaround. So I collect on Thursday, then return on Tuesday. Students can write in their journal away from class, and I encouraged them to decorate their journal covers to personalize their notebook (thus far, only one student has done so – and she was appalled that others did not!).

The response here was great – they completely empathise with the idea of not having enough time, and I think they appreciate that I’m engaged enough in the project to feel rushed or dismissive feedback is detrimental.

By the time we got to this, most people were chomping at the bit to leave, so we didn’t press this point – I think I’ll turn it into a writing prompt!