For the past ten weeks, I have been running. More specifically, I have been using apps from Zen Labs Fitness to get better at running. I began with their C25K app, an eight-week program that takes the user from not much of a runner to running approximately 5 km, or about 3 miles; then I progressed to week 9 of their 10K app. Last night, in a downpour, I ran just over 7 km in about 50 minutes. Considering that Week 1, Day 1 consists of 20 minutes of running one minute, walking one minute, I’m pretty proud of my progress.

Running for almost an hour, even in the pouring rain (or perhaps especially), gives one the chance to reflect on many things. When the digital Zen lady whispered into my ear “you are halfway there,” it occurred to me that many fitness apps are a great example of progressive learning, feedback, and scaffolding.  There’s a good reason for it, too – as a fitness instructor, when a client says their goal is to run a 5 km race, but they’re new to running, I’m not going to say “There’s the treadmill. Start running and I’ll be back in half an hour to check your progress.” Whether your coach is an app or a person, par 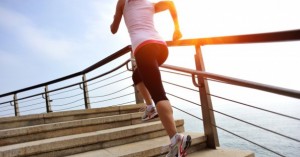 In the classroom, we can do the same thing. We can’t expect our students to be ready for the 5k when they’ve just started. We need to help them see the goal, then provide them with the plan to get there.

END_OF_DOCUMENT_TOKEN_TO_BE_REPLACED

Today, I tried something new with my second-year students. It’s a variation on the minute paper that many teachers use to get some quick, informal feedback from students. This is what I wrote on the board: 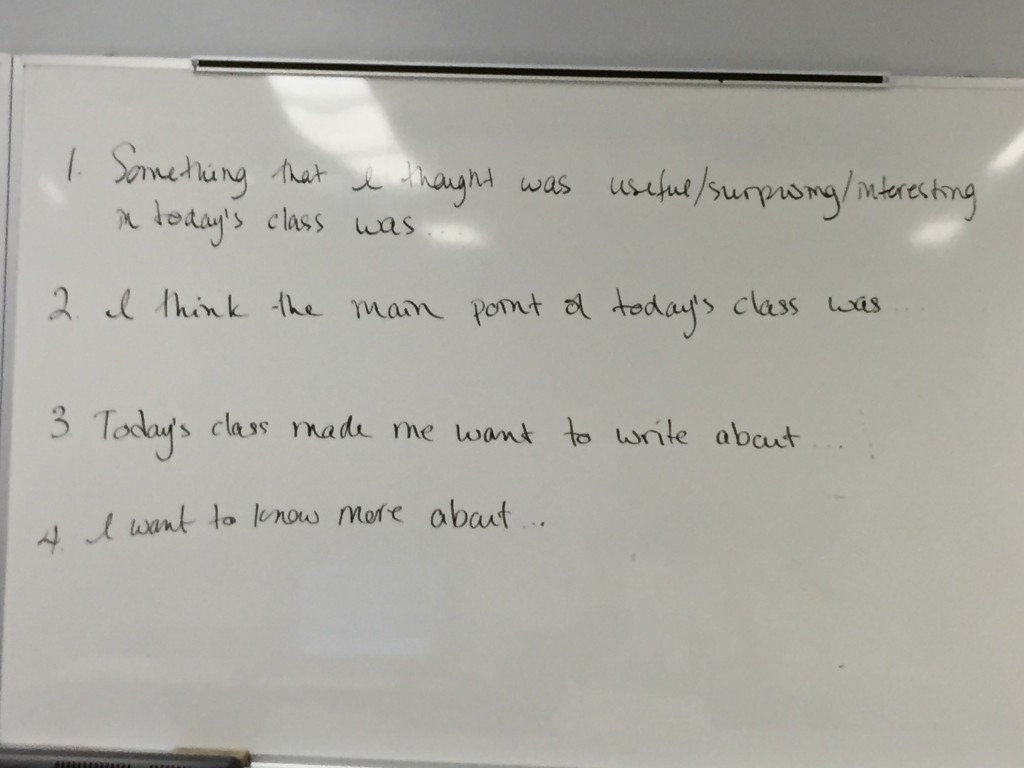 Today’s class was mostly discussion of the first ten chapters of Frankenstein, which we are looking at from a feminist perspective (the course is about critical theory and ‘alternative’ perspectives on canonical texts). In the class today, I had a few objectives. First, I wanted the students to start discussing the novel as a whole, with the three essay topics informing their discussion. Secondly, I wanted them to begin keeping track of their observations while they read and discuss. Thirdly, I wanted them to start compiling quotations and other support for use when it comes time to write.

Here’s how the class went:

1. I reviewed the essay questions. When it comes time to write, each student will choose one of the three proposed topics, but for the in-class discussions, they have to address all three themes (alienation, gendered responsibilities, and social virtues). We talked a bit about what each of those themes means, and I drew their attention to some thoughts in Mary Shelley’s introduction to her 1831 version of the novel.

2. I introduced the observation table:

…and told them to reformat it as they see fit.

3. Their first group task was to discuss the two main events of the first ten chapters, and relate each one to the three themes. Then, still in groups, they had to start filling in their tables. I suggested a few ways to split up the task, but let them decide what worked best for their group.

4. I finished the class with the four writing prompts. I told them to choose any two, and write two or three sentences. I told them they could include their name, especially if there was something they wanted me to respond to, or omit their name if they preferred to remain anonymous.

Honestly, I need to reread their responses if I want to discuss the specifics, but I will say a few things. First, I was quite happy with the level of engagement. All students wrote about two things, and wrote at least three sentences. They all explained their points, elaborated on their thoughts, and connected their response to specific ideas from the discussion. Secondly, I was happy to see that students chose widely from the four prompts, and that their responses demonstrated different ways of interpreting the prompt. So, for instance, in response to “I want to know more about…” one student expressed some confusion with one the essay topics, while another expressed interest in ‘real life’ Frankenstein experiments. For the latter, I posted a link to our class Facebook page, and thanks to the former, I will start next class with a rewording of the essay topic in question, and see if that clears things up a little.

Suffice it to say, I believe the experiment was a success, and I will certainly use it again.